I always try to make something special for Saturday's evening meal. It's especially nice in the fall and winter when my husband makes a fire and we eat beside the crackling warmth.

I came across these recipes in Southern Living Magazine. One for Pecan Crusted Chicken Tenders (sometimes you just gotta have chicken fingers!) and the other for Spinach and Mushroom Saute. Adapting recipes to fit my healthier way of eating is going to become part of my daily life, so I made a few changes to the above recipes and came up with what has become a keeper. 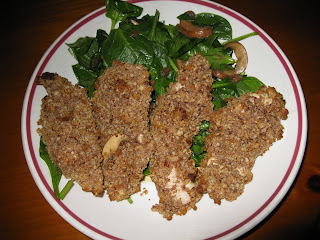 I followed the spinach recipe pretty closely only I didn't cook the spinach all the way. I wanted more a warm spinach salad consistency so after I cooked the onions and mushrooms, I added half the bag of spinach to the pan, took it off the heat and gently tossed it until it wilted down slightly. I put the rest of the spinach in a large salad bowl and tossed it with the warm spinach and mushroom mixture and the lemon juice.

For the chicken fingers, I used my food processor to grind one cup of pecans with 12 sesame crisp crackers instead of saltines, a couple of tablespoons of (insert my best Giada DeLaurentiis affectation here) grated Parmigiano-Reggiano cheese and some cayenne pepper. I omitted the flour and used a beaten egg to dunk the chicken tenders before pressing the nut mixture onto each one. I baked them on the rack as directed and served them on a bed of the warm mushroom spinach salad. This isn't intended as a foodie blog, but it looked so nice plated that I had to grab my camera.
Posted by Andra at 1:37 PM