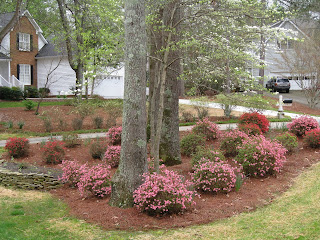 The rain finally stopped although it's still gray outside but the azaleas are in full bloom at the front of the house, an explosion of pink and red that are pure joy for the eyes. It's amazing that the ugliest shrub in the Universe 50 weeks of the year can one of the loveliest sights for a fleeting two weeks.

This morning when we woke up, Rob said to me, "I really want to have a McDonald's breakfast, do you mind?" I answered no immediately and then thought about it a bit. Was I being polite or did I really not want it? I thought about the sweet and savory deliciousness of a McGriddle but then thought about the grease and chemicals and how ill I would feel after I ate it and no really meant no. What I really wanted was soft boiled eggs (the kind that when sliced open look just like a Cadbury creme egg) on buttered cinnamon raisin Ezekiel toast. This made me think about food cravings and wondering to what extent food cravings are psychological or physiological.

I'm not a doctor nor do I play one on TV but I'm thinking that, for the most part, the body craves healthy food but the mind craves what is unhealthy. Granted, if you have yeast overgrowth the yeast will make you crave sugar but once the yeast is killed off by a cleanse and kept at bay by limiting sugar and bad carbs, the body just doesn't want it. The mind, on the other hand, where the binge monster hides out waiting to pounce, can tell you it wants junk. Anyhoo, I was drinking my fresh juice while my husband truly enjoyed his McDonald's breakfast and I thought it would be hard for me. But it really wasn't, I'm pretty happy about that.

I've got the crock-pot going with Sunday dinner and it smells so good. I've got chicken breasts and thighs going in a homemade BBQ sauce, which will be shredded up in the manner of pulled pork and served with tangy coleslaw. If you haven't been to the Eating Well website, you're definitely missing out on a fantastic resource for delicious and nutritious recipes. Check out the Barbecue Pulled Chicken and cole slaw recipes.

Enjoy the rest of the weekend (they come and go so fast) and I'll see you at the weigh-in tomorrow.
Posted by Andra at 12:31 PM