Another pound gone this week, 188 for a total of 89 pounds gone. I've been keeping very closely to my exercise goals and I feel really good if a bit sore from Tuesday's training session. Not much else to report at the moment so I'll leave you with something delicious... 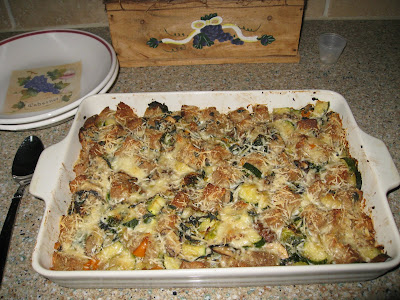 I had completely forgotten about this recipe until I mentioned it in yesterday's post, don't know why, though, because it was an absolutely delectable dish. This is Marian's Savory Vegetable Bread Pudding from the September, 2009 issue of Southern Living magazine. I didn't make many changes to the recipe other than using a whole wheat rustic loaf that I purchased at Whole Foods and I added lots more veggies. In addition to what the recipe called for I added double mushrooms, lots of thinly sliced Brussels sprouts and two medium zucchini that I roughly chopped. I added the bread cubes to all the sauteed vegetables and mixed well to allow the bread to soak up all the lovely vegetable juices left in the pan, then transferred the mixture to the baking dish and poured over the egg, milk and cheese mixture. I let it sit for 15 minutes before popping it in the oven. This recipe made 6 very filling servings and was fantastic left over.
Posted by Andra at 9:00 AM