We enjoy our weekends here so much that they just fly by. I pottered in the kitchen all yesterday morning , I made yogurt, cut up some beautiful tropical fruit and made the weekly batch of breakfast muffins. As the clouds cleared and the sun dried the air, Rob and I took a glass of wine on the deck to enjoy the afternoon.
Last night we caught up with the rest of the planet and watched Avatar. I have to keep it real and tell you after hearing all the hype, seeing The Hurt Locker (and Titanic, hee hee,) Avatar was a bit of a let down. Nerd alert: Unobtanium, seriously? (I bet George Lucas wet himself laughing when he heard that one.) Zoe Saldana put down a breathtaking performance and that's the best that James Cameron could come up with for the thing that was worth killing an entire people for. The metaphors were as subtle as lead filled balloons but there were some good points such as Na'vi being the best alien language since Klingon. Did you love it, hate it? Do tell!

It's a hot one today, dry and sunny, nearing 90. We've spent the morning making more Mel's Mix to plant the last of the seed potatoes and transplant more peppers. It got quite smelly working the chicken, steer and mushroom poop into the vermiculite and peat moss because of the heat. Pew, pew, pew! We'll head back outside when it cools off a bit.

Susan at the farm was kind enough to tell me about her method of making yogurt so I was very excited to try it out. It's very easy and requires no special equipment. She uses her milk, of course, and a freeze dried yogurt starter but told me that good quality yogurt can be used for a starter. For my first time, I used plain yogurt as the starter and supermarket organic milk because I didn't want to risk wasting the real milk in case of a kitchen fail.

I warmed the milk in a sauce pan to about 110 degrees, turned off the heat and stirred in one-half cup of Greek yogurt then transferred the mixture into mason jars and placed them in my crock pot which I preheated on low while I was heating the milk. 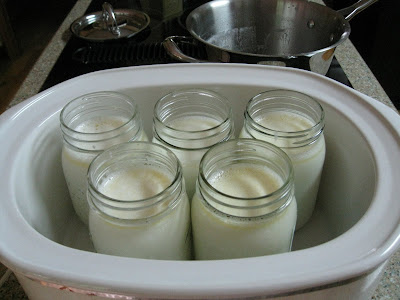 Then I put on the crock cover, unplugged the crock pot and wrapped it in a thick bath towel to hold in the heat. The milk needs to incubate undisturbed for 8 hours. 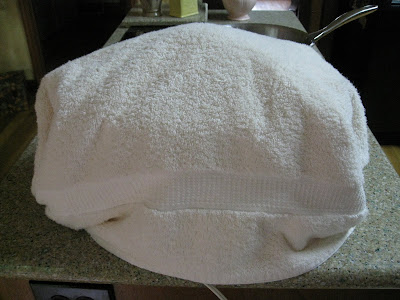 Unplug the crock pot, don't burn down the house

At 7pm last evening I had yogurt and it wasn't bad at all, perhaps not as rich tasting as yogurt made with real milk. It made a lot, too. I strained two of the jars in a mesh strainer lined with paper towels overnight and this morning I had a nice batch of yogurt cheese. It's very creamy and a bit tangy. The rest I strained just a little to remove some of the excess whey. I served it with the Champagne mango and pineapple I chopped up yesterday, drizzled with raw honey and sprinkled with cinnamon. 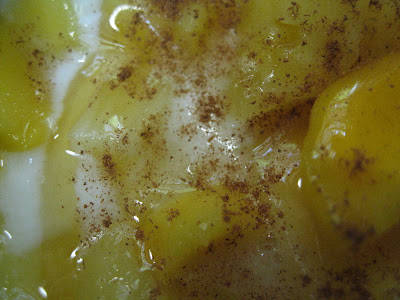 I've enjoy my recent dairy projects so much that I just ordered 200 Easy Homemade Cheese Recipes: From Cheddar and Brie to Butter and Yogurt.

I look forward to making yogurt again but this time I will invest in the proper starter and use real milk. I will let you know my thoughts on the book when it arrives.
Just six more days until we pick up Sonja Henie. I'm going to hit up the farmer's market that morning and buy all manner of fresh veggies to make a Grand Aioli to serve with Sonja (whom I will be roasting a'la Thomas Keller.) I will have lots of pictures including the weekly photos of the broiler chickens I've been taking to chart their amazing growth.
I am so excited for the Memorial Day holiday weekend! What have you got planned?
Posted by Andra at 2:15 PM