It was four years ago that Rob and I moved into Shady Dame, not that we had intended to name her, but I'll get to that in a bit. We had sold our first home so quickly (this was shortly before the "bubble" burst) that we felt pressured to find our dream home. Our Realtor, Heather, had patiently taken me to house after house after house. I think 30 was the number we had reached before she said that we were at the bottom of the barrel of homes in our desired area and price range. She had suggested that by increasing our price range by just just a small increment, we would get a whole new barrel.
It was Mother's Day 2006, an unofficial Realtor holiday. I was up insanely early as we had just returned from a trip to England to visit Rob's family and I was still trying to get back on Atlanta time. I received an e-mail from Heather with the first batch of new listings. I opened the e-mail and saw this picture... 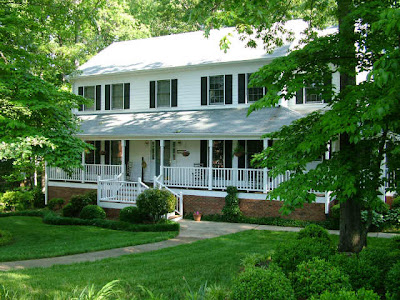 I just knew that I was looking at our house. I patiently waited for Rob to wake up (making coffee and innocently banging and clanging in the kitchen until he did.) I showed him the picture and he said to call Heather. I begged for a showing even though it was Mother's Day. Heather made it happen and at 2pm we pulled into the neighborhood. Rob and I were walking down the breezeway and we just knew this was "The One." We hadn't even stepped inside yet!

After all the stress that comes with real estate negotiation, we got the house. We closed on June 30th and started the big move in the first days of a very hot July. As we were driving up to the house on one of those hot days Rob said, "Look at all those trees!" to which I replied, "Look at that Shady Dame." The name stuck. Happy anniversary, Shady Dame.
Posted by Andra at 2:11 PM