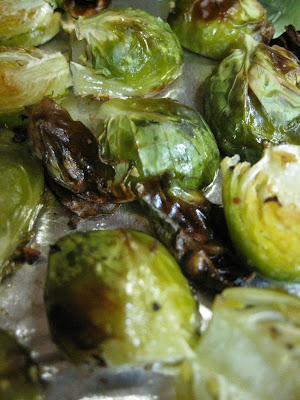 Roasted Brussels Sprouts
I never liked Brussels sprouts, like cabbage only smaller. But when one marries an Englishman, Brussels must become part of the kitchen repertoire. Over the years, I've become more tolerant of these suspect little cabbages. And when I tried roasting them, I really learned to appreciate the slightly sweet and nutty flavor of them.

It's very simple. Just trim the stems and peel off the outer leaves and cut them in half. Then toss them with olive oil and some everyday seasoning, put on a foil-lined tray and pop them into a preheated 400 degree oven. Roast until they are just tender and getting browned up, which will take about 20-25 minutes. For extra flavor drizzle on some balsamic vinegar before serving. I love the little leaves that fall off and get crisped up like little chips. 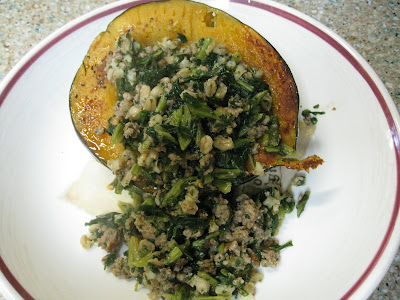 Hot Sausage, Greens and Barley with Acorn Squash
This is a fall favorite and a simple supper. Wash the acorn squash, pat dry and cut in half lengthwise, scrape out seeds, brush with olive oil, season with salt and pepper and roast on a tray in a hot 400 degree oven until fork tender, it takes about 45 minutes to get to the texture I like. Meanwhile, put one pound of sausage meat in a skillet and cook over medium high heat until crumbled and cooked through. Transfer to bowl, use the same skillet to cook the greens (I used a 1 pound bag of frozen turnip greens but you can use any greens you like, fresh or frozen.) Then I added some reserved cooked barley, about 1 cup. Once this mixture is hot, add the sausage meat back. I don't need to season any further, sausage meat has plenty of flavor. Serve mixture in the cavity of the acorn squash.
I purchased the sausage meat from the farm, it's a local, pastured Tamworth pig that is turned into whole hog sausage. That means that every cut of meat is ground up and seasoned. It's so tasty and quite lean for sausage, the flavor and texture is so good, no fillers or hard things. If you have the opportunity to try whole hog sausage, give it a go and let me know what you think.

I transformed the leftover sausage, greens and barley mixture into a soup for supper the next night. Just add chicken stock.
The following recipe is such a keeper, I made it twice, last Saturday and again on Friday. The thinly sliced potatoes on the top is such a refreshing change from stodgy mashed potatoes. Rob gives this recipe is highest marks.

Cottage Pie
adapted from the November issue of Everyday Food

Preheat oven to 400 degrees. In a large skillet, heat olive oil over medium-high heat. Add onion and carrots and cook, stirring often, until onion is soft, about five minutes. Season with salt and pepper and stir in ketchup and brown sauce.

Add meat and cook, breaking up with a wooden spoon, until almost cooked through, about three minutes. Add fresh herbs and dark beer and bring to a boil. Cook, stirring frequently, until slightly reduced, about two minutes. Sprinkle flour over mixture and stir well. Add 8 ounces of water and cook until mixture thickens, about two minutes. Stir in peas and season with salt and pepper, to taste. Transfer mixture to a two-quart baking dish. 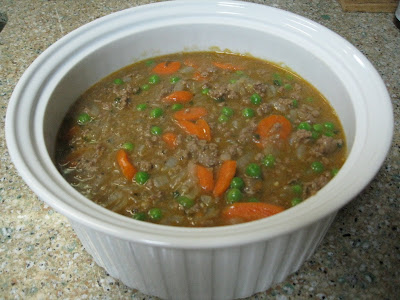 Top with potatoes, overlapping the slices then drizzle the potato slices with the melted butter and season with salt and pepper. 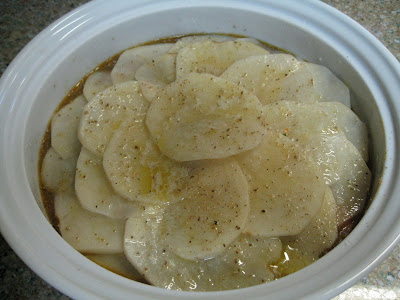 Bake until potatoes are browned around edges and tender when pierced with a knife, about 45 minutes. Let stand 10 minutes before serving. Devour! 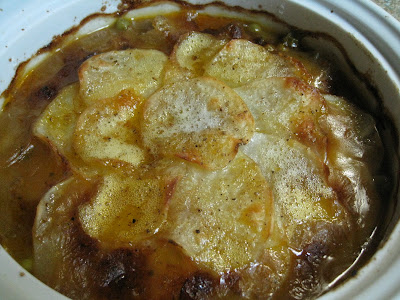 Today, I'm making pot roast to try out the enamel and cast iron dutch oven we purchased last weekend. I've always wanted one and when World Market offered these beauties for $50, I could not resist. They had red and blue, but could not resist the garden green hue. 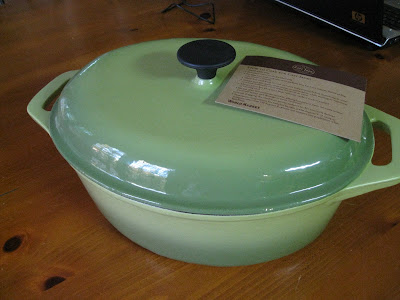 I will let you know how it turns out.

I'll leave you with one of my favorite questions...What you been cooking good?
Posted by Andra at 11:31 AM