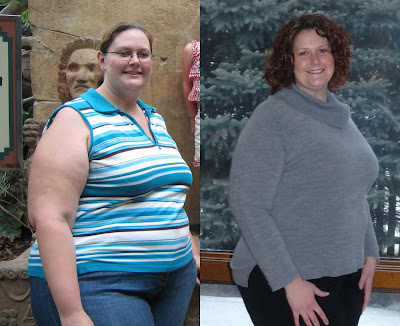 Hi Readers!  My name is Kelli and I’m a new mom.  I had my first child in December of 2009 and joined Weight Watchers for the bazillionth time four weeks later.  But this time…it’s working!  I’ve lost over 70 pounds in the last 13 months and I’ve still got about 100 more to lose.
So, what is different this time from all the other times I’ve tried to lose weight? I think it comes down to three things:
I’d like elaborate on the third point.  In all the times I’ve done WW in the past I have quit long before getting to my goal.  Usually after a few months, in fact.  Why?  In all my other attempts I’ve sat down with a calculator and said “Ok, if I lose 2 pounds a week between now and XX date I will weigh XX pounds for this event.”  I’d get that weight in my mind as the goal weight for a friend’s wedding or Christmas or graduation.  As the weeks passed by and the date got closer I’d find myself getting further and further behind on the goal.  I’d recalculate and see that now I had to lose 3 pounds a week to get there and then more.  Eventually it would seem impossible, I’d declare myself a failure who could not lose weight, and I’d give up.
A few weeks back I was in a low spot and was bemoaning slow weight loss to my husband. He, in his infinite rationality said “yes…but half a pound a week is 26 pounds a year!”  I just looked at him and rolled my eyes.  That would mean 4 years to lose 100 pounds you know!  Someone like me has to lose MUCH faster than that or what’s the point?
But then I thought "what was I doing four years ago?"  It was early 2007.  I was planning a wedding, working a pretty high stress job, recovering from the holidays, etc.  And I weighed around 320 pounds.  So, if I had lost that measly 26 pounds a year that I scoffed at I would now weigh 216 pounds.  WOW!  Guess what, those four years passed and instead I weigh significantly more than 216 pounds.  So, who am I to turn down 26 pounds a year?  Let’s think, if I lost 26 pounds a year for the next four years where would I be in February 2015? 178 pounds.  And I’m pretty sure that the 2015 version of myself would be very thankful that I didn’t just throw in the towel because the weight was coming off too slow and instead embraced the half a pound a week.
I am not saying that my goal is going to be only 0.5 pounds a week.  But, what I am saying is that expecting an average weight loss of 2 pounds a week is completely unfair.  It’s nearly impossible to maintain and it leaves us feeling like failures.  Instead maybe we should accept that success can be an average of 1 pound a week, 52 pounds a year.  It’s doable.
Unlike a biggest loser contestant, most of us don’t get to put real life on hold while we attempt to lose weight.  We have to continue working, caring for our families, attending celebrations, dealing with home repairs, car repairs, illnesses and the like.  Life keeps on happening and doesn’t take any notice of the fact that we need to cook and pack every meal, make time for exercise, and drink all of our water.  There are going to be ups and downs.  There are going to be occasional gains and plateaus and slow weight loss periods.  There will also be times when life cooperates and we can make big steps in our progress.  It’s OK. In fact, if we take the time to really consider this, we should expect it!
And finally…embrace.  This one may be harder.  We may be able to say to ourselves “fine, I can accept and expect it but I refuse to be happy about slow weight loss!”  But, there ARE benefits to losing slowly.  The biggest one in my mind is maintainability.  The changes I have to make to attain an average one pound a week weight loss are not hugely drastic.  They don’t require me to spend 20 hours a week at the gym.  They still allow me to enjoy an occasional splurge meal.  They do not require me to put my life on hold.  I can do them for the rest of my life.
Other benefits include less unwanted attention from co-workers as you lose, a more spread out effect on your clothing budget, and possibly less loose skin.
So, my challenge to all is to spend some time and think about where you were two, three, or even four years ago and ask yourself “where would I be if I had lost 26 pounds a year since then?” Let’s try to accept, expect, and embrace slow weight loss!
If you’d like to join me on my journey as I shed these last 100 pounds please join us over at www.sangriasisters.com. I blog there with my best friend Michelle.
Thanks Andra for letting me guest post! What an honor!
Kelli
Posted by Andra at 8:00 AM