A few weeks ago, when the lovely Andra offered a copy of the Light Issue of Martha Stewart Everyday Food to a reader in exchange for cooking and blogging one of the recipes, I jumped at the offer. I’m not sure the blog had even been posted for twenty minutes before I responded, so I should probably start this guest blog post with an apology to all of the other readers I beat out with my quick commenting skills. I admit that being online all day, every day for my job probably gives me an unfair edge.
I was particularly interested in this challenge because I no longer allow myself to buy the tempting food porn that lives by the check-out lane at the grocery store. I’m trying to be a more conscious consumer on many levels, from food to clothing, and cutting out magazines was one of the first steps I took. However, I still love them. I can’t help it. They’re so gorgeous and inspirational! And one chock full of light and healthy recipes seemed like it would be a keeper – something that could live on the counter with my cookbooks and not just end up in recycling.
When the magazine arrived, I spent a good hour curled up with it, reading each recipe in its entirely to decide what I should make. Then I couldn’t decide, so I turned it over to my husband asked what he would like to eat. Finally, we picked a recipe from the Grocery Bag column (which gives a shopping list for the week with meals for each day). The meal we selected was Parmesan Chicken with Mushrooms and Brussels Sprouts. We picked it because it looked quite easy, with no cooking techniques we haven’t mastered, and because it took relatively few ingredients, which made it a nice choice for shopping on a budget.
Parmesan Chicken with Mushrooms and Brussels Sprouts 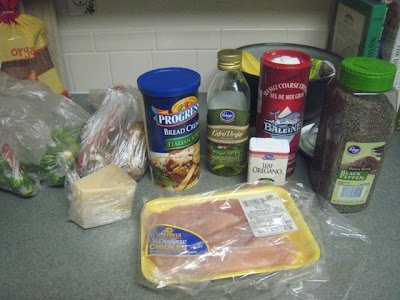 Preheat oven to 450 with racks in upper and lower thirds. In a small bowl, mix together panko and Parmesan. In a 9x13 inch baking dish, toss chicken with 1 teaspoon oil and thyme; season with salt and pepper. Arrange chicken in a single layer and sprinkle with panko mixture. Drizzle with 1 tablespoon olive oil and bake on upper rack until topping is golden brown and chicken is cooked through. 15 to 20 minutes.
Meanwhile, on a rimmed baking sheet, toss the mushrooms and Brussels sprouts with 2 teaspoons olive oil; season with salt and pepper. Roast on lower rack until golden brown and tender when pierced with a knife. 20 minutes. 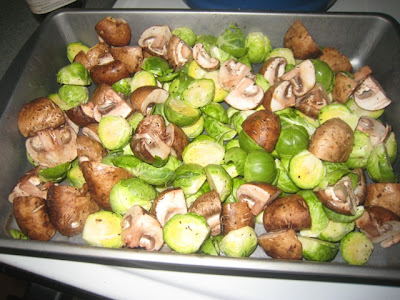 Here is where I confess that I am not a by-the-book cook. I use recipes as a jumping off place and tweak them to suit my tastes and the ingredients I have on hand. This recipe was no exception.
First, I used half the amount of chicken specified (3/4 a pound) since I was cooking for 2. Since I had a tub of Progresso Italian bread crumbs in the cupboard, I used them rather than buying panko. And finally, I found when I got out the ingredients that I was out of thyme – so playing on the Italian bread crumbs, I used oregano instead! Otherwise, I followed the recipe to the letter. (I made the whole bread crumb/Parmesan mixture rather than halving it. I had some left-over, but not as much as I would have expected.) I also dredged the chicken in the crumbs prior to sprinkling the mixture on top – that way both sides of my tenders had some coating on them. 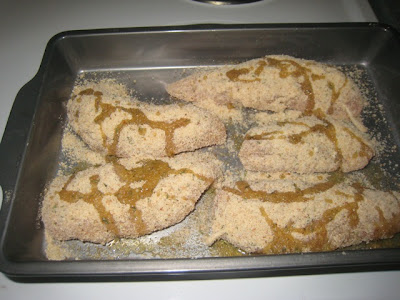 The prep time took longer than the recipe specifies. I started rinsing and trimming the sprouts at 5:35 p.m. and my dinner did not hit the oven until 6:05 p.m. However, I will admit that I have terrible knife skills (so trimming took me longer than it should have) and that my husband and I were chatting and drinking celebratory  wine the entire time because I’d gotten exciting news that morning. (I was offered a job in Michigan in the town where my sister and her husband, who are expecting their first child, live!) I can see how someone less distracted and with better knife skills could get the prep work done much more quickly, but I still think 10 minutes is pushing it. 15-20 would be my realistic best guess, especially if you are grating the cheese. (I never buy pre-grated cheese. It’s usually $1-$2 more expensive per pound and often contains fillers and anti-caking agents that creep me out.)
The 20 minute cook time is quite accurate, and I loved that both pans could go in the oven at the same temperature at the same time. There’s nothing more irritating than having one dish get cold while another heats because the oven temp has to be changed!
My husband and I agreed in our overall verdict on this dish: It was good, but a bit bland and could benefit by some tweaking. (I have to admit that we like SPICE. I add hot sauce to macaroni and cheese! So, for people with intact taste buds, this recipe might be perfect as-is.) My husband ended up adding Sriracha sauce to his chicken, which I think might be a good pre-baking tweak. I might squeeze some on the chicken just prior to drizzling the oil, or possibly add some directly to the bread crumbs to make them into a paste prior to applying them. I could also just add red pepper flakes to the bread crumbs. Red pepper flakes jazz up anything!
The sprouts and mushrooms were less problematic in their degree of blandness. The sprouts that cooked right next to a mushroom were especially delicious, and mushrooms themselves were lovely. However, next time I think I’ll add some balsamic vinegar to them along with the oil. It should give just a tad more pop. I might also add in some minced garlic and/or more the ever popular red pepper flakes. 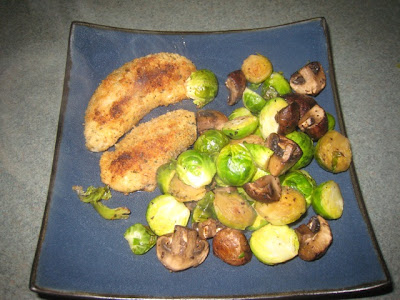 All-in-all this a recipe I’ll repeat – but with changes that make it my own!
Posted by Andra at 8:00 AM