Souvlaki the Nutritious and Delicious Way

I love Mediterranean flavors; lemon, fresh herbs, fresh vegetables, grilled meats, spicy olive oil and olives.  The Mediterranean way of eating has long been thought of as one of the most nutritious and delicious diets.
Souvlaki is a version of Greek fast food; marinated grilled meats served with veggies served in a pita.  After a winter of eating comforting foods, I crave lighter flavors when the weather warms up and souvlaki is a great way to usher in grilling season.  This dish makes the perfect quick supper.  It is satisfying, healthy and delicious.  It's not really a recipe, as such, but a method.  You can customize it to suit your taste and the amount of ingredients used if you want leftovers.
This was dinner for two. I used 3/4 pound of chicken breast, though my favorite way is with turkey tenderloin.  You could use lamb, too.
First, the marinade.  I cut a large lemon into wedges, squeezed them into a zipper bag and tossed the squeezed wedges in, too.  Poured in some olive oil, snipped fresh chives and oregano and added the chicken.  I smooshed it up then stashed in the fridge for a few hours.
Next, the tzatziki.  I mixed half a cup of 2% Greek yogurt with a small shredded cucumber, chopped fresh mint and dill, a pinch of salt and a drizzle of red wine vinegar.  I put that in the fridge to let the flavors meld.
When you're ready for supper, make the salad.  I tore up crisp romaine hearts and added lots of sliced cucumbers, grape tomatoes that I sliced in half, pitted black olives (you could use kalamata, but I find them too salty,) thinly sliced scallions (you could use red onion if you prefer,) and some cubes of feta cheese (I used marinated feta from Trader Joe's.)  A light drizzle of extra virgin olive oil and red wine vinegar makes the perfect dressing.
Grill the marinated meat to your preference and slice it.   Serve the meat with the salad, the tzatziki and some grilled pita.  Devour!  It goes very well with a glass of crisp Sauvignon Blanc. 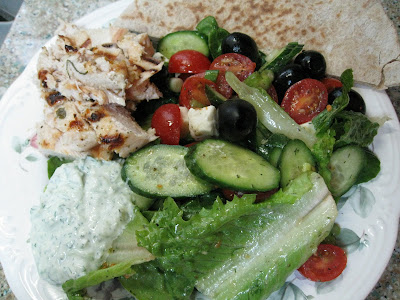