A Juice Fast for Two 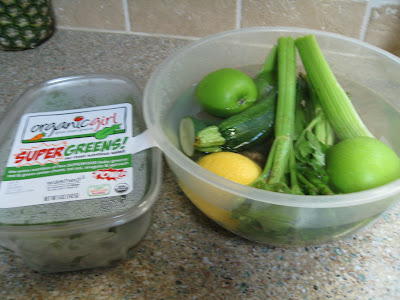 We started the day with some tea and lemon then our first juice.  I used that whole packet of super greens along with celery, cucumber, asparagus, zucchini, green apple, lemon and ginger.  It's a super green bloat buster but I like what Donna calls it... 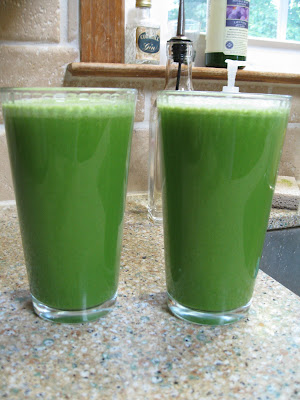 
This was quite sour, but the last thing on our palates was homemade vanilla chocolate chunk gelato I made us for a treat last evening.  You do the math. 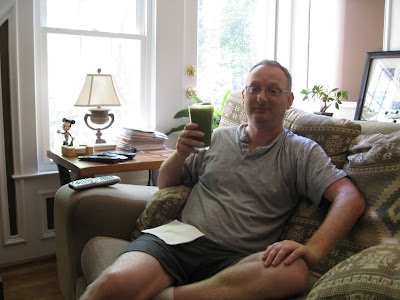 This is what I wake up to every morning.  I'm one lucky lady, hee hee!  Not that I'm such a prize, I was not camera ready due to a severe case of bed head.
Some of my reading material for today... 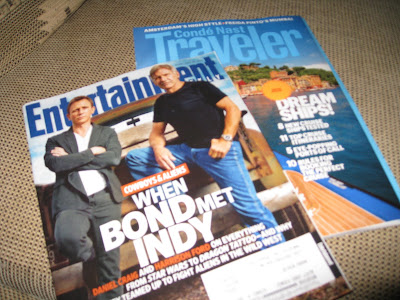 Must avoid any and all things having to do with food like Food Network, Cooking Channel, food magazines and cookbooks.  Which always seem to be a big part of my Saturday.
I took Tally on a gentle gimp around the block, my right knee has been bothering me this week but we both needed to get out and about a little.  In case you hadn't heard, it's really fraking hot out!  I had a shower and then it was time for lunch.  Er, juice. 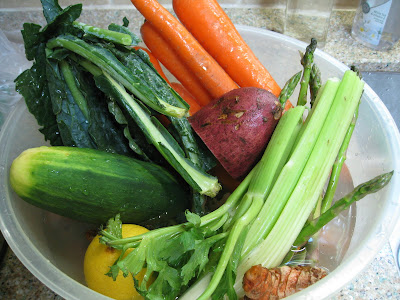 This one is an orange green combo with cucumber, kale, celery, lemon, carrots, turmeric root, Japanese yam and a juicy pluot that had gone too ripe to eat. 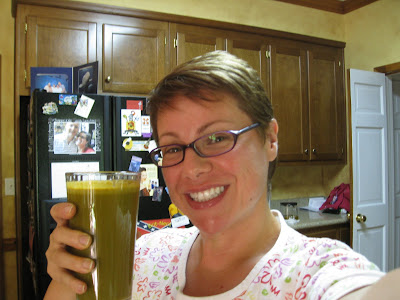 Cheers!
Now this was tasty.  Orange veggies are sweeter, fresh turmeric root tastes fabulous and kale is surprisingly mild when juiced.
At 1pm, Rob said he was hungry but otherwise feeling pretty good.  I made him a cup of Sweet & Spicy herbal tea and I had a big glass of the herb and lemon sun "tea" that I made yesterday. 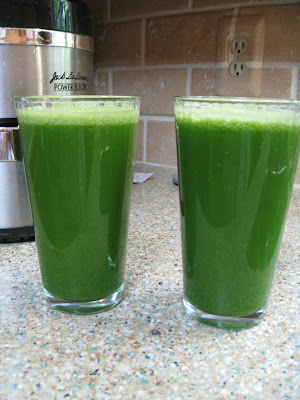 Another round of mean green at 3pm after Rob said he was ready to gnaw off his own foot.  This one is loaded with kale, golden beets, cucumber, zucchini, celery, green apple and ginger.  I left out the lemon by mistake.  I much prefer the juice with the lemon, it seems a little flat without it.  Beets are damn tasty, though. 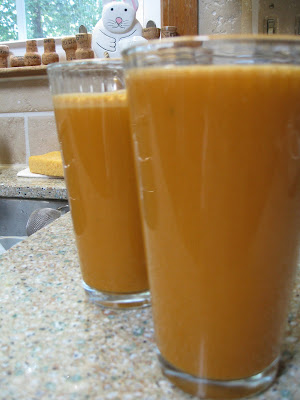 Time for supper juice, last juice before the highlight of the evening, the Pina Colada smoothies.  This one was so orange-y and delicious with carrots, golden beets, Japanese yam, turmeric, zucchini, ginger and lemon.  It was a bit sweeter than the others but I could tell by the look on Rob's face that if it was overly-green tasting he might give up and head for the ham and cheese.
At about 7:30pm we decided it was time for smoothies. 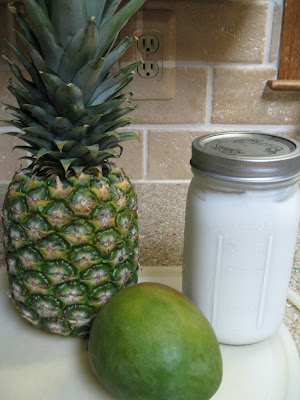 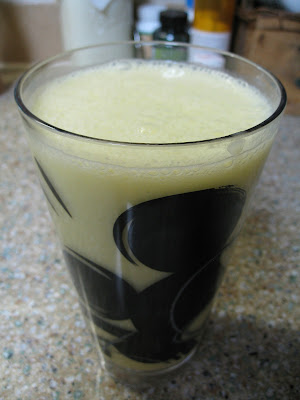 The fat in the coconut kefir made the smoothie have lots of staying power.  I'm freezing cold now, though.  We had to turn off the fan and turn up the temp on the central air.  I was just laying under a blanket before I came to post this.  In July, in Georgia, during a heat wave.  Wheat, sugar and alcohol are all inflammatory foods, which cause acid and heat in my body.  Juicing and sticking to an anti-inflammatory diet is one sure way to stay cool in this heat.
Rob boycotted day two, but we will be having juice for breakfast and a light, veggie-centric day.  I can't do food prep for Rob and a juice fast for myself, it's just too hard.  That's why I always planned my previous fasts around his traveling.
I wish I had some good news about Tally, but she's still quite poorly and not holding anything down.  We'll see how she is in the morning and then decide if we need to take her to the emergency vet hospital for more treatment.  Think good thoughts for her.
Posted by Andra at 8:53 PM