It's cleanse day 4 and it's the best day of the week so far. Still waiting for my energy level to bounce back fully but the aches are subsiding and the brain fog is clearing. I'm enjoying the plant-based meals but when I took Tally out earlier, someone in the hood had the grill fired up and the smell of smoke and meat in the air nearly made me weep. I'm all for eating lots of fruit and veg, but I honestly don't think I could give up meat forever.
Snacks are encouraged on the cleanse.  Whole Living has nine "balanced snacks" to choose from.  I made three of them this week.
The first was Cranberry-Pumpkin Seed Trail Mix.  Since no added sugars are allowed on the plan, dried cranberries are a no-go, I don't think I've ever seen unsweetened dried cranberries in any food store.  I used golden raisins instead, they are my favorite.  I mixed them a blend of raw nuts and seeds; pumpkin, cashews, almonds and walnuts.  The half-cup serving size is generous, since the overall daily calories are so low, this makes a satisfying snack. 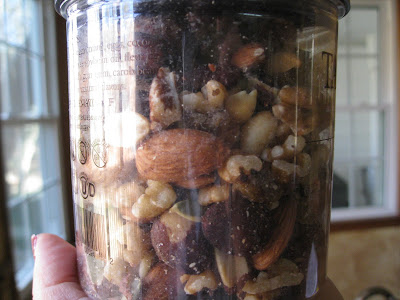 Next up is the Dried Fruit and Nut Bites, these babies are awesome!  It was a bit of a messy process grinding everything up then kneading the mixture and rolling the balls but it was worth the effort.  I ended up with 24 balls, rather than 20 but stuck with the serving of four.  These are so tasty and filling, this recipe is a keeper.  I used raisins, prunes and dried apricots and cashews, almonds, walnuts and flax seeds.  I rolled them in sesame seeds.  Yum! 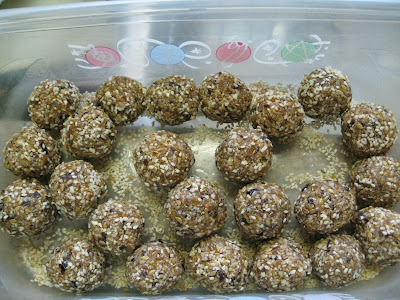 Last, I made up a batch of Minty Pea Dip.  This was quick, easy and really delicious, bright, garlicky and with a bit of sweetness from the peas. 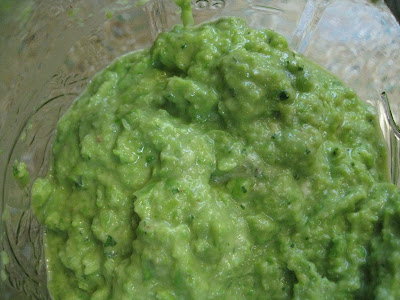 Raw garlic is really healthy but hard to eat, so this is a great way to get some raw garlic in a most delectable way.  The recipe said it makes 2 cups but I got a little over 3 cups. 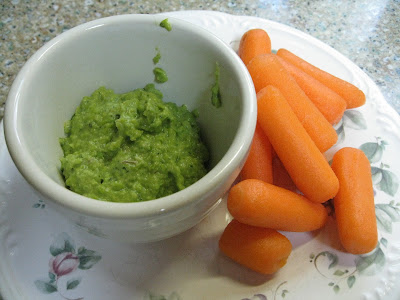 Next week I want to try the Pistachio Stuffed Dates with Coconut.  Mmmm, dates!
Posted by Andra at 8:09 PM