Thanks for all the well wishes, you guys are the best!  I am feeling better today, it was one rough week.  Rob flew off to Zurich yesterday and was just starting to feel the stirrings of what I had despite my best efforts to keep him well.  I sent him with Zicam, Halls, Theraflu and all his supplements.  I hope his week away isn't too terrible, poor Bunny.
I was planning on uploading the cruise pics and doing my trip report today but in light of the tragic accident involving Costa Concordia off the coast of Italy, I thought it would be bad timing.  My heart goes out to the passengers and crew.  The photos were completely unnerving, the muster drill hadn't even been conducted yet!  During our muster drill,  things were so chaotic, people were inattentive, farting around on cell phones, turning up late and talking over the crew members, we were convinced that if there were any sort of accident that we'd be screwed. People think that it can't happen but the sea is dangerous and even modern ocean liners aren't immune to those dangers. We took note of our area, our lifeboat and where the life jackets were stored that afternoon just in case.  Thank goodness we returned home safely, I can't even imagine what those poor people went through.
I do want to share  a couple of pics from our anniversary, hoping it won't be too insensitive because it was a special day.  Rob "surprised" me with a beautiful bauble.  We picked it out sometime last year and the little stinker hid it and told me to forget about it.  Like that was going to happen.  And when I finally got to put it on, the squee was deafening.

This was waiting for us when we arrived in our room.  It was delicious, light and fluffy vanilla cake, not to sweet with a bit of jam between the layers.  The frosting was a creamy whipped icing.

And my little black dress, which isn't so little but I sure felt beautiful that night. 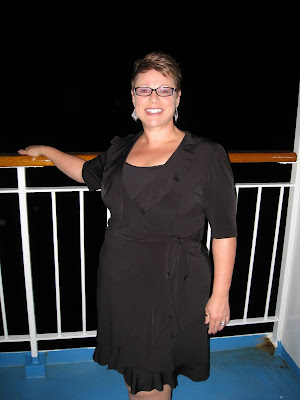 Here we are at dinner on New Year's Eve celebrating 10 years of marital bliss.  It's not always bliss, of course, but there is no other person I'd rather share my life with.  The lovely waitress and hostess had just sung us "Let Me Call You Sweetheart" and it sounded so sweet.  Rob was mortified, though.  We only ordered one dessert each, but they brought us another anniversary cake! 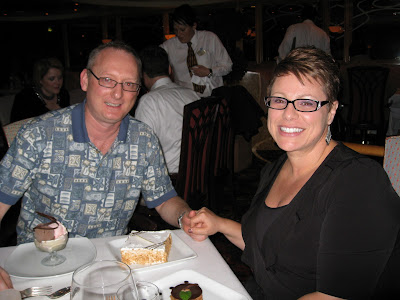 Moving on, did you see that wicked awesome Patriots game last night?  I'm not much of a sports fan but I always keep one an eye on my old hometown teams.  Maybe they won't make it to the Super Bowl but I'm psyched I didn't miss that spanking Tom Brady gave Tim Tebow and break all those records.  I did feel bad for the Saints, though.  That was another great game, despite the outcome.
What did you have for breakfast today?  When I saw this Baked Oatmeal recipe on Gina's Skinnytaste I knew I had to make it.  I had bananas ripening on the counter and blueberries in the freezer, and it was a good excuse to try my new Le Crueset baking dish that I found on clearance for $10. 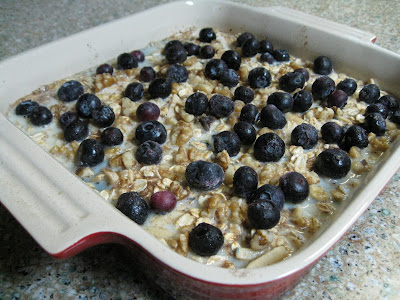 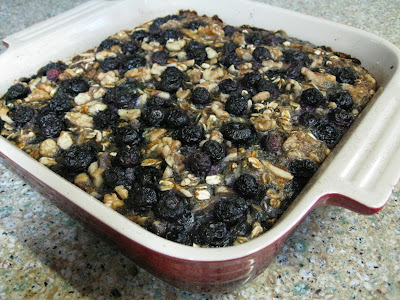 I didn't change the original recipe too much.  I used my real milk (I shudder at the thought of pasteurized skim milk.)  I added additional spices like nutmeg and ground ginger and since I don't use sweetener in my regular oatmeal, I didn't think it would be needed here.  And it wasn't.  This dish is a keeper, warm and satisfying and baked bananas are so luscious.  You must try it! 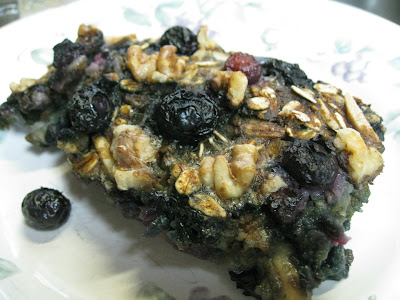 I felt well enough to take Tally walking this morning.  We went for almost an hour.  It's cold out today but the sun is shining and it felt great to get some fresh air.  Speaking of my precious girl, here she is doing what she does best, whatever the heck she wants to do.  I flipped the cushion down so she wouldn't steal my spot, as she does, but when I returned two minutes later this is what I found... 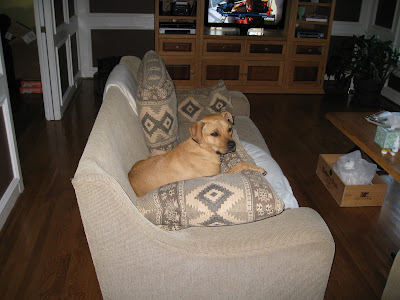 That's all for now, I hope Sunday finds you safe and warm.
Posted by Andra at 1:48 PM