A Week in Food~ Not Your Mother's Weight Watchers 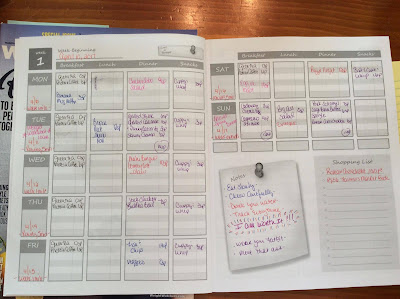 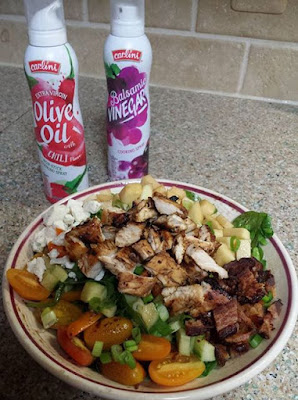 This featured a bed of salad greens topped with spring onions, orange bell pepper, cucumber, snow peas, grape tomatoes, sweet crunchy apples, crumbled blue cheese, bacon, and grilled chicken. I used the new sprays that I bought at Aldi as the dressing. The chili oil was really nice, lots of flavor for the amount. I love the format of the balsamic spray, but I've been spoiled by the real thing, so the vinegar left me a little flat. 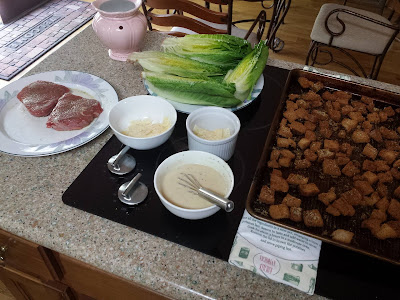 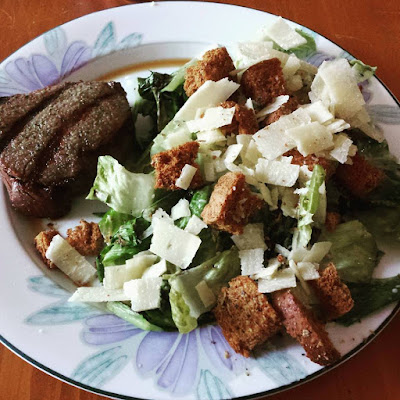 I was dreaming about the taste of grilled beef, so this happened. I made homemade croutons and Caesar dressing from Gina's Skinnytaste website. I cut the lemon juice in the dressing with white balsamic vinegar because if it's too sour, Rob won't eat it. The dressing and the croutons were amazing! 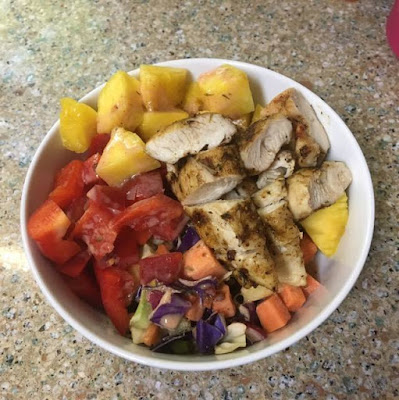 Oh, this was a bowl of deliciousness, look how pretty it is! It has a base of supergrain blend, which contains quinoa, a crunchy salad blend from Trader Joe's which has seven or eight different chopped vegetables in it, chopped red pepper, diced fresh pineapple, grilled chicken breast seasoned with jerk seasoning, I like the McCormick blend, it's super spicy. And a homemade dressing of a dollop of nonfat Greek yogurt, a splash of vinegar, and some sriracha. Whip up a Buddha bowl, the only limit is your imagination. I wish I had though to grill the pineapple. I won't forget next time.

This was made on one of those days, one of those terrible, no good, very bad days. The kind where you just want to order takeout and stress eat the day away. I shut those thoughts down immediately and threw this together. All that spice and crunch really put a smile on my face. That's what we call a Non-Scale Victory!

No photo. Another Trader Joe's find from my last visit. Low point and delicious seasoned patties of mahi mahi. I cooked them off and put them on a couple of flatout flat breads each and a big heaping scoop of lemony cole slaw. The cole slaw is an official Weight Watchers recipe and it knocked my socks off, the lemony dressing was a revelation! We ate off that batch three times, it never got soggy, watery, or discolored. I think it's going to be my go-to summer slaw. 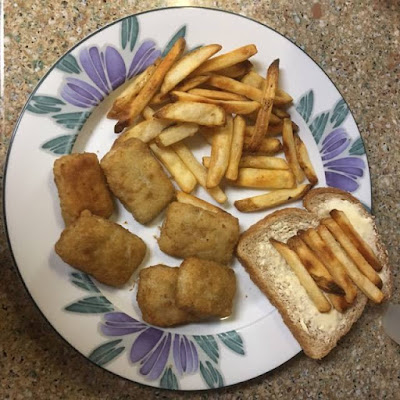 Rob was after me for fish and chips. How was I going to fit that into my plan? Trader Joe to the rescue!  They had frozen fish nuggets and Handsome Cut Fries. I scanned them with my handy app and saw that the points were far smaller than I had anticipated. I made sure I had enough points for a double serving of fish and a hearty 5 ounce serving of fries. I had enough for bread and butter, too, because one simply does not have fish and chips without a chip butty. This plate is about 17 points, which is a bit more than I typically like to have at one meal. I had eaten tons of raw veggies throughout the day to keep points low and to make sure I had my vegetables servings in. I don't like frozen fries, they always taste funky and fake, but not these, they tasted homemade. Highly recommended when you need that French fry fix.

Saturday~ Pizza Night (12sp)
We have Pizza Night every Friday at Shady Dame, but because Rob was craving fish and chips, I moved it to Saturday. I didn't snap a pic, I'll have to do it another time. It's very simple, Flatout Artisan Rosemary Olive Oil pizza crust. It is indeed flat. Flat as a slice of paper but it's quite tasty. I spray it with a bit of EVOO, bake it on a tray for five minutes, take it out and layer on crushed tomatoes, crushed red pepper, fresh basil, a sprinkling of Pecorino Romano cheese and two and a half ounces of shredded part skim mozzarella cheese. Back in the oven for 10 minutes at 400 degrees F. I make one for me and two for Rob. It's a delicious 12 points. I pair it with a green salad if I need a bit more food in me. 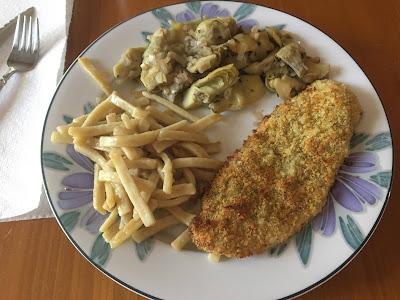 The whole point of the new Weight Watchers is to make the plan fit your life, and not the other way around. And hey, holidays happen, but it's not an excuse for me to go off the rails at this time in my life. I wanted a crispy, crunchy, fried pork cutlet with toothsome, buttery noodles. I made a few tweaks and got exactly what I wanted. I baked the cutlets and crisped them up with panko and EVOO spray (the organic Spanish one from Trader Joe's has amazing flavor and no propellants,) ditched the egg dip in favor of a light brushing of Dijon mustard and cut the butter back to just one tablespoon for 6 ounces of frozen noodles (which was two servings for us that day.) The artichokes are a spring tradition for me, I usually like them whole and stuffed with my Mother's Italian stuffing but I found this recipe and it was wonderful. Sauteed with a little broth, shallots, and lots of fresh mint, and splash of white wine vinegar and it fit the bill perfectly. 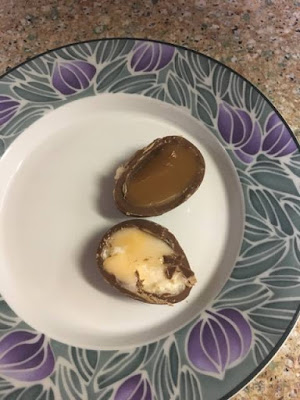 I can't have Easter without a Cadbury Egg. I got one of each, split them, and vacuumed sealed the other halves and hid them in the freezer. I savored this little bit of lovliness, and only had to dip into two of my weekly points. Win!

As you can see, the new Weight Watchers isn't the same as in the old days with fat free Frakenfoods and boring chicken and steamed broccoli every night. I won't bore you with what I ate every week, but look for these posts from time to time.